Alicia Riccio’s photographs could easily be seen as the darkest work included in the show, but they provide a necessary contrast, both visually and thematically. Riccio collects found images, shared on social media, of the whimsical towel sculptures that hospitality staffs create aboard cruise ships, and places them next to the always triumphant name of the ocean liner that they were found on.

Underneath the blown out reproduced photos, are a small line of text that correlates to tragedies that have occurred on the same ship.  The contrast highlights the disparity between marketing communal experiences of pleasure, and the reality that any creation of utopia is still incapable of changing human nature .  At the end though, the desire to maintain a pleasant memory, or the illusion of one, is what causes the pixelated photographic memento to dominate the retelling of the ships events.

Kirk Amaral Snow repurposes building materials to create a dialogue based on impermanence and facade. While much of his work is inherently quiet, the pieces selected for this show focus on learning to live with failure. His sculpture When Transition Becomes Stasis, is a reflection on succumbing to one’s own anxiety, building a permanent structure around a collapsible ladder to ward off the superstition of walking underneath it.  His other sculptures, Market Reliance and We’ll Get Back to You literally make the “bright side” impossible to see by having them fall flat on their face.​

Anthony Montuori creates work that is overflowing with references, both art historical, philosophical, and pop cultural.  His work seamlessly blends high and low in a way that is both a reflection of, and eventual part of internet culture, a place where context and content are so convoluted, that they eventually negate each other.  Every reading of each idea is valid, and yet completely incorrect at the same time.

Through humor, playfulness, and a vast amount of technical skill, Montuori is seriously devoted to work that he doesn’t actually take seriously.   He purposefully builds games where the player is unable to do anything other than fail, even when they win.  Everything he creates is an intricate, labor intensive reflection on the pointless aspects of human life, especially the playing of video games. 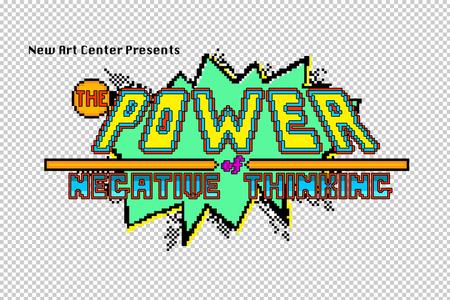 Stephen St. Francis Decky has created a dreamlike world entirely his own, filled with bright pastel colors and adorable characters.  These overwhelmingly cute figures, who exist in acrylic paintings, film, and soft sculpture are rarely as carefree as they appear.  Their permanent smiles and seemingly utopian landscape, often mask an undercurrent of terror and uncertainty that these sweet creatures appear oblivious to.  Decky has used the visual language of childrens cartoons, but instilled a dynamic pathos that can appeal to all ages.

In a society dominated by motivational slogans, passive and unsympathetic language frequently masquerades as empowerment.  People who are naturally critical of their surroundings, or see things through a pessimistic lens, are routinely chastised for their outlook and told that they must change themselves in order to succeed.  Meanwhile, those who would rather ignore anything deemed unpleasant are championed for finding the “good” in even the most precarious of situations.

The Power of Negative Thinking challenges the rigid culture of optimism at all costs, and asks whether a world of motivational speech ever actually changes the way people feel.  Does the constant pressure to maintain a sunny outlook just imbue a heavier sense of failure to those that find themselves unable to think that way?

The artists included in this exhibition have all embarked on projects that, in some way, challenge our notions of pessimism.  They have created work that is simultaneously vibrant and inviting, while still being unapologetically cynical.

The work on view employs a variety of different mechanisms, such as humor, quiet avoidance, or even direct confrontation, to question the way in which the viewer engages in the performance of optimism.

For this exhibit, he has created an original game that can be played throughout the duration of the show.  Super Maria is a painstaking recreation of the original Super Mario game for Nintendo, but one where the hero never meets a happy ending.  Instead of galavanting through fantasy worlds to save a princess, Maria actually just has to travel the same path as Mario so that she can go to work every day.  She navigates the same dangerous terrain as her similar looking male counterpart, but instead of celebratory fanfare, she simply collects a meager paycheck and returns to do it all again tomorrow.

This nihilistic reflection on the mundane absurdity of daily life, is highlighted by the way Montuori has coded the game.  Each level merely represents a day in the life of the average worker, and as such that person will age over time.  After each of the seven days of the week has been played 365 times, Maria’s only reward will be that she grows older.  The further the audience gets in the game, the more difficult it will be to play- not because the difficulty of the levels increase, but because Maria slowly deteriorates and is unable to do as much as she once was.

Should the audience complete the 75 years of Maria's life the game will no longer be able to be played, serving as a metaphor for the fact that every hero, no matter how much they accomplish, will eventually be forgotten.

​His characters, perfectly encapsulated by his stuffed animal sculptures, are always smiling, but only because their expressions are sewn on.  No matter how precarious the situations around them become, their faces are unable to change, forcing the viewer to wonder how they confront situations in their own life.

Bradley Tsalyuk & Corey Dunlap are partners in both life and art, who frequently create work that straddles the line between enticing and repulsive.  This dualistic approach led them to make the piece Don’t Wish it Were Easier, Wish You Were Better, a found phrase that is both motivational slogan, and crushing piece of self-loathing.  This bold text is printed on a gradient banner which is attached to smiley-faced balloons, giving the appearance of a tangible meme.  While the text and the balloons are intended to be both figuratively, and literally, uplifting, their combination serves as a sharp critique on the culture of constant growth and improvement, and provide a horizon line that over the course of the show will gradually move further away.  This overwhelming sculptural form, whose message is ascending towards the sky, is ultimately unable to fight the forces of nature, and will deflate over the course of the exhibition under the weight of it’s own message.

To call Randy Stevens’ paintings over the top would be an understatement.  She revels in creating work that challenge the viewer to question both her taste and theirs.  Through the use of vibrant color, perfectly flat surfaces, and gallons of glitter, Randy creates paintings that are seemingly vapid, yet loaded with pathos.  ​

With a remarkable amount of technical skill, Stevens is able to render sumptuous images that are shockingly beautiful, yet always have a razor sharp wit.  She brilliantly employs artifice to highlight the objecthood of her work, and all art work, even going so far as to scrawl the actual price of her painting on the surface.

This exhibition was made possible by the New Art Center